If you’re not careful, the future can become the past pretty darn quick.  A matter of days ago, we were on the road out of Denver pointed East.  In no time at all, Kansas, Indiana, Illinois, and Ohio crammed themselves into memory, never to be seen again.  Now, the present is taking place off a three-quarter-mile gravel driveway in a Pennsylvania forest.  For the moment, we’ve returned to a place we left almost five years ago heading West.  At the time, we had no idea where we’d end up or when.

It all turned out pretty well.  For my part, I reconnected with my father as he went into assisted living and we moved into his condo.  I spent time with him and I hope helped ease him into the end of his life.  I got to know my two sisters and discovered the sense of having a family, something we had missed in a lifetime of being in places different from each other.  Barbara made friends with my sisters and our longtime family friend Jeri, something I never guessed would happen. Jeri hired us both to work at the actuarial firm where she managed the office.  It was a pleasant place to work with nice people and made for a comfortable lifestyle.

We saw the Rocky Mountains and the Painted Desert, Monument Valley and the Grand Canyon, Santa Fe and the Four Corners of the Navajo Nation.  We explored old silver mines and Victorian era mountain towns.  From our eighth floor balcony we watched storms blow down from the mountains, sweep across the city and throw our heavy cast aluminum outdoor furniture around like paper kites.

Last week, it was time to go, just because it was.  The drive across country went right through the heartland and its astonishingly stark beauty.  At times the short grass prairie went on forever with nothing else in sight.  Then we’d pass a town defined by a stand of trees, a tractor dealer, a couple of grain warehouses and a few frame houses.  Oh, and a Gothic revival church, the only brick building for many square miles. 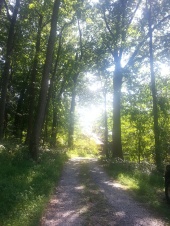 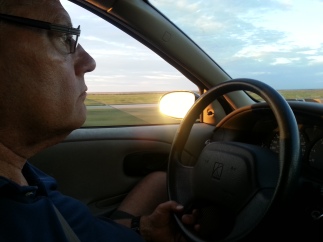 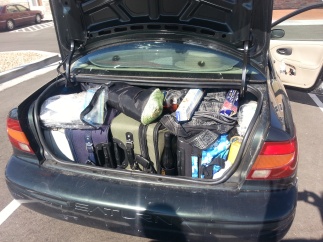 Now, it’s all in memory.  We’re staying in an RV owned by a couple of old friends of Barbara’s on their 33 acres of woods with their rustic house in the middle.  She’s visiting friends and family, and the future has become a town named Setubal in the country of Portugal.

It’s all sensory overload.  An entire country driven through in the course of one week crammed into our brains. One week from now, we’ll be on a different continent where everyone speaks an unfamiliar language, trying to make our way around.  We can’t envision it, can’t feel it, there isn’t room in our heads for it.  I suppose it will be like vacation trips we’ve taken to Europe in the past, which weren’t particularly difficult; but I’m still as yet unable to believe it will happen.  All of a sudden, we’ll be there, and that’ll be the present.