Traveling standby is like playing a casino game, or maybe more like betting on the horses at an OTB parlor.  All the people with tickets get in line to board, and you’re left on the outskirts.  You watch a screen above you which switches back and forth from a seating chart in which the unassigned seats are shown in white, then a list of people awaiting seats, the names of the winners who have gotten seats with check marks by their names and the others still waiting numbered form one to whatever.  As seats get assigned, the number of white squares changes as does the numbers assigned to the hopefuls

For two hours I sit dozing in a chair as Barbara keeps telling me there are six seats available and we are seven and eight.  Suddenly we are bumped to nine and ten, and then 11 and 12.  I look at the ticket counter and see a pack of crew members milling around, and it looks to me like we don’t have a chance in hell.  I keep thinking, let’s get out of here, go to a motel and tomorrow we’ll buy some seats.  But Barbara is an old hand at this and keeps saying, “We don’t give up until they close the doors.”

When boarding is called we take our positions under the screen.  The number of available sears had shrunk to five.  Passenger boarding begins, with two names checked of standbys who have gotten on.

A moment goes by and suddenly the number of white squares goes to eight; we’re numbers 9 and 10.

We begin to watch the screen as if our tickets were betting slips.  I begin to realize that the number of confirmed passengers will keep changing.  People will at the last minute.  One or two might get caught in traffic and not make their flights; others will miss their connections. One can get an idea of the latter phenomenon by watching the weather in other parts of the country.  A nearby storm means seats might open up.

That night the number of white squares kept increasing by ones and twos, with the checked names going up comparably.  Our numbers on the list of remaining seats kept decreasing.  We were down to six and seven for a long time, then all at once we dropped to five and six, then four and five.

My blood heated up, my pulse quickened.  My horse was coming up alongside the pack.  It stayed at four and five as the number of white squares stayed at three.  Then suddenly we were two and three, but there were still three of us not assigned.  Apparently they were waiting to see if the last three ticketed passengers would appear.

Another problem began to look possible.  What if there were only one seat left between the two of us?

What’ll we do then?  My flight attendant sister passed along a message that, in such a case, I should take the seat and Barbara come along tomorrow, because of something having to with my status having a “buddy pass.”  Frankly, I didn’t see either one of us  to staying in Newark another day and then having to find the other somewhere in Portugal.  We held our respective breaths. The status remained unchanged for what seemed an eternity.

Then Seabiscuit put on a burst of speed in the stretch. Number 1 standby was assigned.   A few minutes later I heard a rustling behind me.  I turned to see Barbara speaking with the gate agent.  When she turned back, she held two boarding passes in her hand. 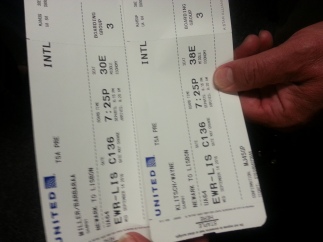 We pushed into the boarding line.  We both had middle seats eight rows apart, but we were on the plane to Lisbon.

I’m not much of a gambler.  My life tends to follow the odds. If they’re in my favor, I stand a chance of winning, if against me, I pretty much always lose.  As I understand statistics, that’s the way it’s supposed to be.  Once, a friend of mine won $3000 at a casino with a single just for the hell of it bet.  I told him, “You realize nothing good will ever happen to you again.  You had your shot.”  He agreed with me and, as far as I know he’s had lousy luck since then.

I don’t know what the odds are for flying standby but I felt we had beaten them.  Barbara and I gave little cheers as we boarded, then little waves as we found our different rows.  We would meet again in Lisbon.

Posted in travel without stuff