Portugal is a nice place to walk in but it’s hard to walk on.  That is to say, it’s hard on the feet.  The sidewalks, ruas and travessas are paved with these stone blocks.  On most surfaces, they’re cubes roughly three inches on a side. And I do mean roughly.  They’re not exact cubes as would be the case using high volume calibrated stone cutters.  They’re chipped and slightly off sided, no two alike, suggesting they’re cut by hand.  I assume so, since the way the sidewalks themselves are formed is that somebody pounds them into the ground by hand, one by one. 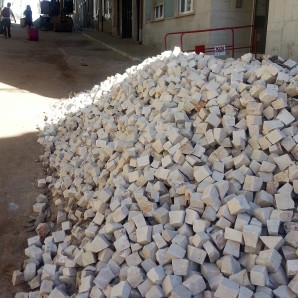 Make no mistake, this is all very deliberate.  It’s not like they don’t have any paving contractors in the country. The main avenidas are paved in concrete the usual way, and the bicycle lanes through the parks and boulevards are composed of a rather pleasant pebbly material that gives under the feet. Yet most of the pavement continues to be made of those blocks.  Honestly, walking on some of them feels like your feet getting hit with a hammer on every step. 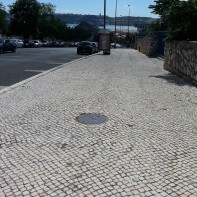 They use different types of stone for different surfaces, whether sidewalks, crosswalks, ruas, parking areas, etc.  There are white stones, black stones, gray stones and brown stones.  I missed geology class the day we were going over Portuguese paving stones, but I’m pretty sure the gray ones are granite and the white ones look like some kind of unpolished marble.

Admittedly, some of the areas are quite attractive, laid out in interesting patterns, notably a black and white crisscross design.  Still, that just adds to the bafflement.  I mean, they could have painted the darn things. 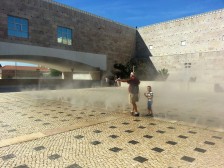 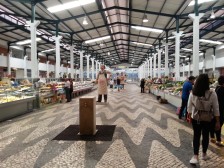 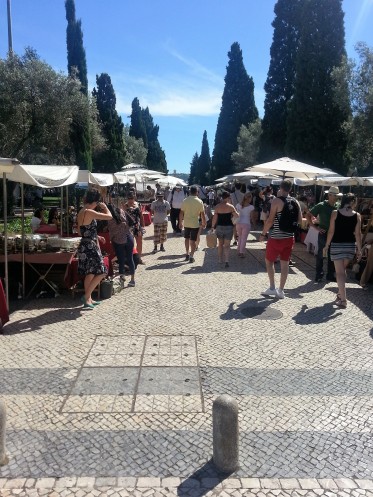 Supposing a section has to be uncovered to get to a water main.  With normal pavement you just break it up, then when you’re done bring in a cement mixer to spread a new layer.  Here, they have to dig up the stones, deliver a truckload of replacements for the broken ones and come back to pound them in again.

They must know they’re being weird.  We saw a torn up section one afternoon that was fixed when we went by it the next morning.  Apparently, they waited for cover of darkness to do the job.

Clearly, there’s some kind of collective cultural conspiracy going on here.  There’s got to be a point of personal pride – or just plain stubbornness — involved in sticking with something so inefficient to produce and uncomfortable to walk on.  I understand there have been mutterings in assemblies of the European Union about the stones being symptomatic of Portugal’s indifference to its ongoing debt crisis.

The best thing you can say about the sidewalks is that they’re quaint.

They’re also dangerous to a newcomer.  I’ve tripped on the edges of paving stones several times since I’ve been here.  You can tell the tourists in this country; they’re the ones lurching all over the place like extras in Night of the Living Dead.  Throughout the day, the expression “Oh, sh____!” can be heard in several different languages.

Apparently, the Portuguese have developed a method of walking that enables them to somehow glide over the sidewalks.  They all have these blissful expressions on their faces like they’re gloating about knowing how to walk.  I suspect they have colloquial expressions for tourists that translate to “wobbly ones” or “people who would never get away with that kind of behavior in their own countries.”

I wonder if the examination for Portuguese citizenship involves a sidewalk aptitude test.  Sort of like a field sobriety test. You have to hold a finger against your nose and look cross-eyed while you try to walk on a Portuguese sidewalk.  It’s mostly to show you won’t be embarrassing yourself or holding up traffic if you stay in the country.

“OK, walk toward me, now step to the side, now stop, hop on one foot. Do the hokey-pokey and turn yourself around . . . “  Oh, right, that’s something else.

Well, you get the idea. Ate logo. 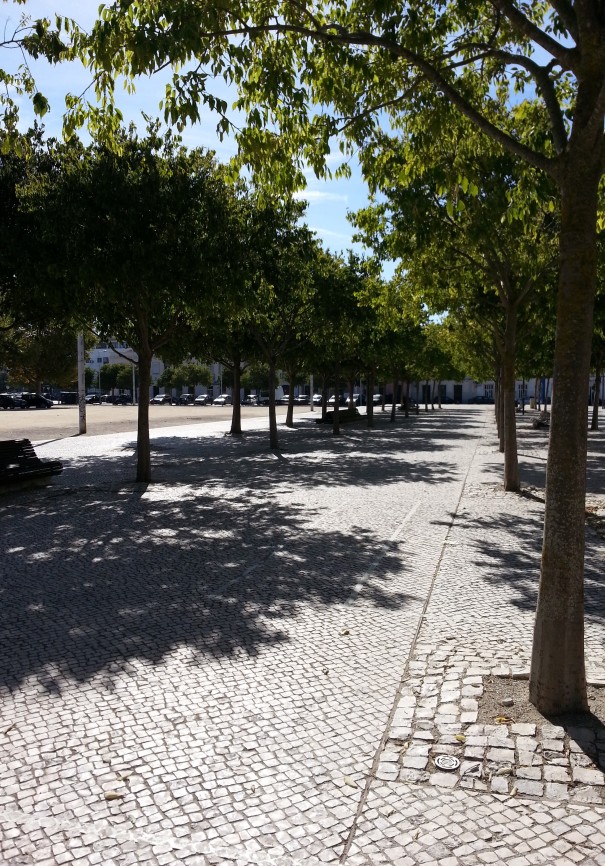 Posted in travel without stuff